Let the Children Come to Me

Some 25 children and adults were welcomed into God’s family through the waters of Holy Baptism in October in Juárez, Mexico. 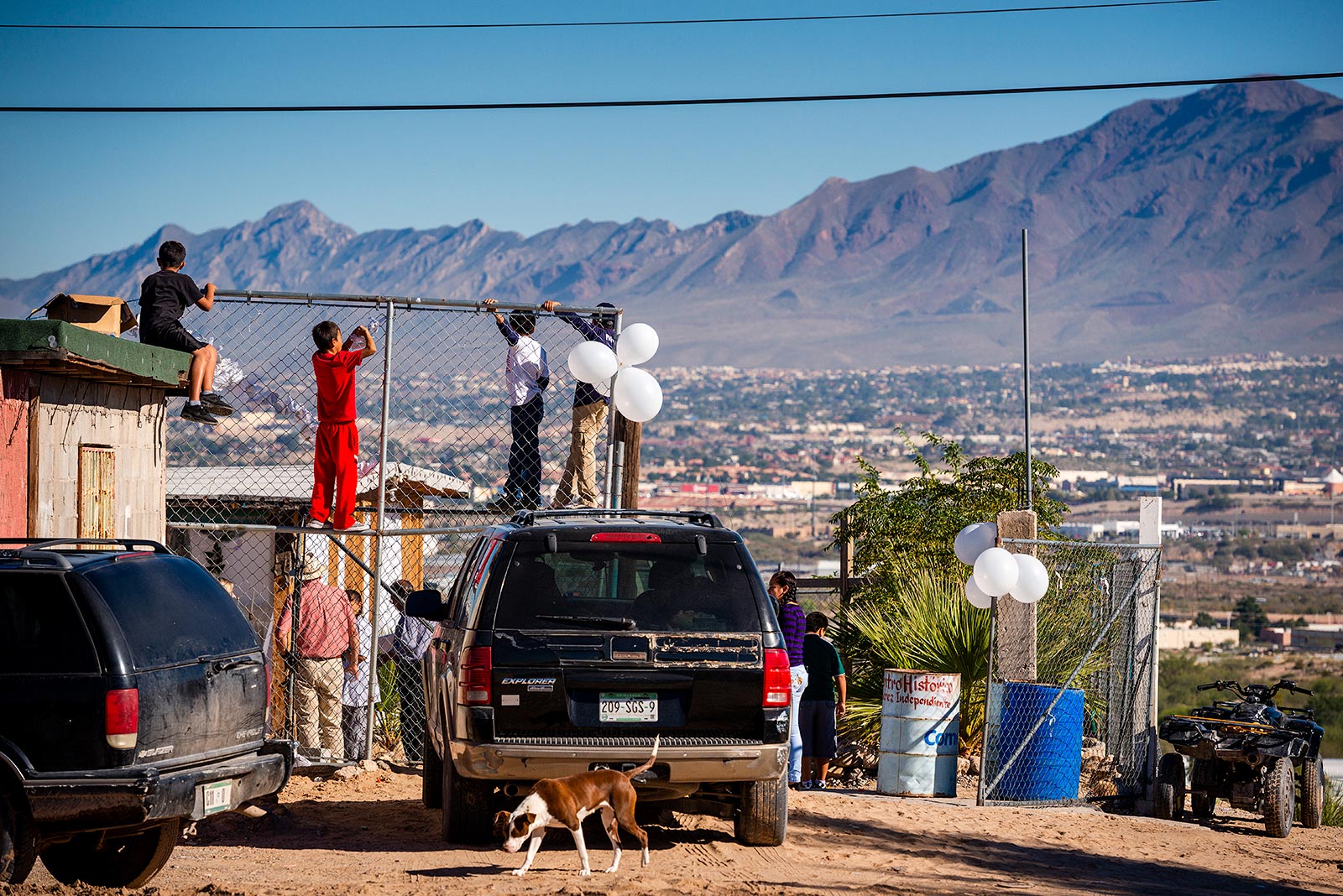 For 10-year-old Kimberly, Oct. 26 was no ordinary day. Even as she laughed and ran around with her friends, adults hastily hung bunting and floral garland and prepared pots of chicken mole, rice and beans for the gathering crowd in Anapra, Mexico. Soon, Kimberly would join nearly 25 other children and adults around a “pop-up” chancel with a makeshift altar, pulpit and two baptismal fonts.

In a dusty corner surrounded by a tall chain-link fence, where she had long ago found a caring community, Kimberly and the others were rescued forever from sin, death and the devil through the waters of Holy Baptism.

Watch an audio slideshow of the service.

A City of Hope

Communities like Anapra, on the edge of Juárez, Mexico, sprung up rapidly when American corporations built manufacturing facilities in Mexican border towns following the enactment of the North American Free Trade Agreement (NAFTA) in 1994. Filled with hope at the promise of good jobs, Mexican families relocated from every corner of the country, rapidly expanding the population of sleepy, old border towns.

Built with salvaged materials, the humble homes have only recently begun to receive basic services such as power, water and paved roads.

The ever-changing politics of international trade make these families easy targets for rival drug cartels with their own form of commerce. Men and women desperate to provide a better life for their families find, or are forced into, employment with the drug gangs, trapping them in a cycle of poverty and violence that sometimes ends in death.

Kimberly is one of many children upended by the violence. Her story is not unique, nor are the effects of witnessing the event that left her an orphan when she was just 4 years old. Her father’s decision to pay the rent rather than the cartel cost him and his wife their lives.

“The kids were suffering from a kind of Post-Traumatic Stress Disorder (PTSD) from the violence that erupted in Juárez in 2006,” said Elvira Viramontes, who serves with Ysleta Lutheran Mission Human Care (YLM), an LCMS Recognized Service Organization in El Paso, Texas.

“At the climax of the violence, some of the kids who suffered the loss of family members were exposing that to the teachers,” recalled Viramontes. “We determined to implement something more, for those who lost family members.”

The Rev. Stephen Heimer, chief operating officer of YLM, reached out to Army Chaplain Steven Hokana, an LCMS pastor with advanced training in caring for combat veterans suffering from PTSD. Hokana, who was stationed at nearby Fort Bliss at the time, came for a week to instruct the teachers and volunteer staff about how to give the kids comfort and care through the love of God.

In 2014, a grant of $13,500 from LCMS World Relief and Human Care helped YLM bring the PTSD training to staff and volunteers working in six separate missions in Juárez. YLM reached out to other groups and government agencies and created a holistic program of spiritual, psychological and physical care for the children and their families. Four years later, the training continues to be put to good use as staff members care for the families in these communities. 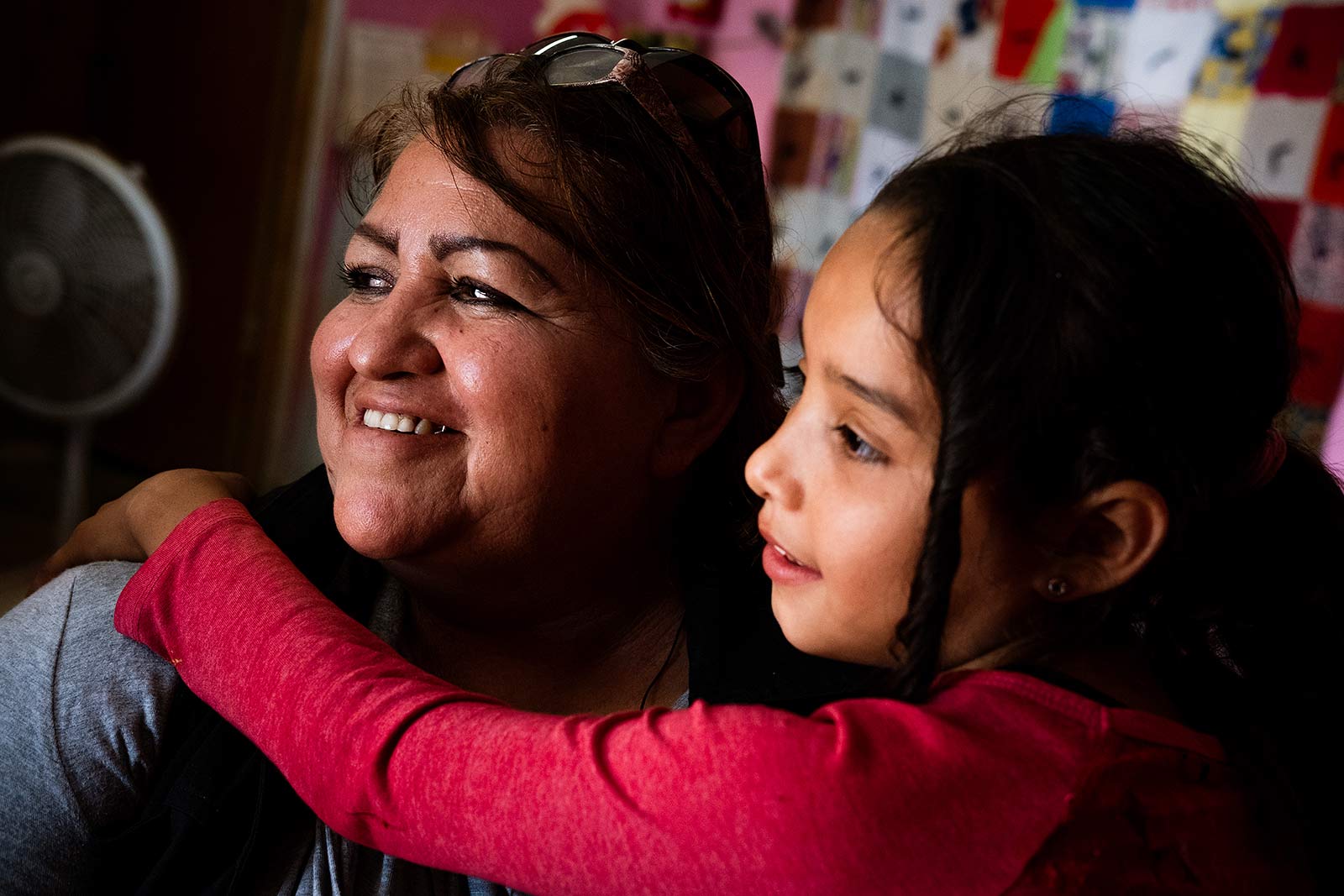 Kimberly holds onto Deaconess Rosy Lira. “Every day we will be here,” said Lira, “because we have God’s blessing to be able to be here.”

Heimer is eager to say that the leadership gifts of Deaconess Rosy Lira, and her faithful devotion to the children and parents of Anapra, have been the driving force behind this newest mission effort of YLM in Anapra in the past 10 years.

When the new mission property in Anapra was given to YLM, Lira, then a faithful volunteer for YLM, was willing to join YLM’s staff to serve with Pastor Javier Lozano in Anapra. YLM provided her with PTSD training with Chaplain Hokana and enrolled her in courses at the Lutheran Hispanic Missionary Institute, another LCMS Recognized Service Organization. Lira graduated in 2011 and was challenged to raise up a team of teachers in Juárez. 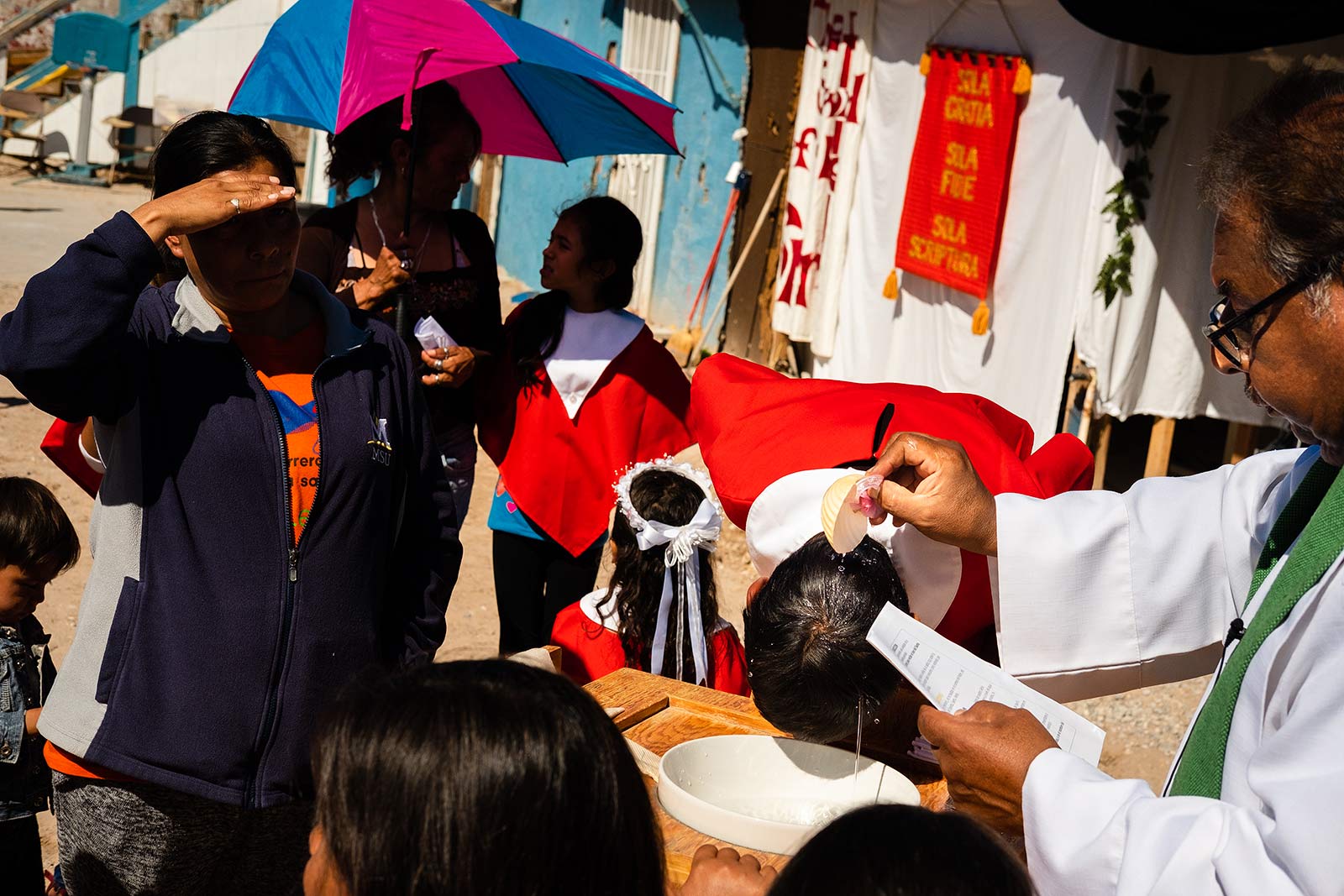 “I had to train 12 teachers for Sunday school. It was my first year of experience,” recalled Lira, noting that there were almost 300 children there at the time. Today under her leadership, the children are taught, fed and cared for in body and soul. She has become a pseudo-grandmother to these little ones.

“We’ve been outside under the strong sun. We’ve been cold. We’ve had snow. People come with their children in their arms. But here they are, seeking every day that spiritual food,” said Lira. She also organizes hot meals for the children, many of whom are left to fend for themselves while their parents work long days.

“Every day we will be here,” said Lira, “because we have God’s blessing to be able to be here.” YLM has provided funds, resources, staff and volunteers through its large network of supporters and partners in the U.S. and Mexico. 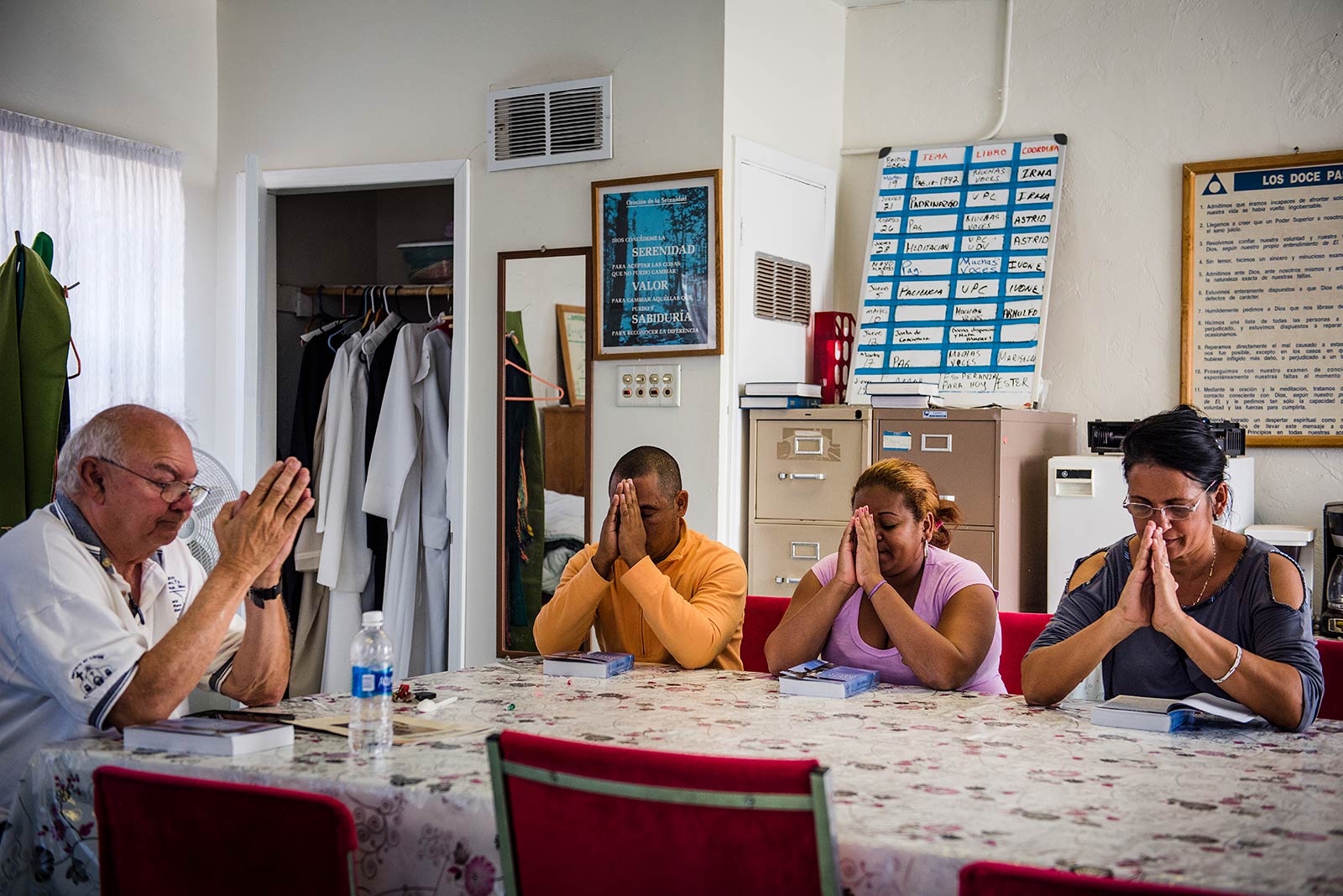 YLM began 36 years ago when the Rev. Dr. Karl Heimer was called as a mission developer on the border by the LCMS Rocky Mountain District. San Pablo Lutheran Church on the campus of YLM was the first congregation established as a result of his efforts.

“When I came here, there was nothing going on,” said Heimer, who explained how he and his son, Stephen Heimer, who was 4 years old when his father took the call to El Paso, have steadily worked to provide “simple acts of kindness” as they preach and teach in El Paso and across the border in Mexico.

“We are known and established in the community,” said the younger Heimer.

Stephen Heimer was already busy serving as pastor of Zion Lutheran Church, El Paso, and providing support to his father and the others at YLM. But in January 2018, he also committed to making the weekly journey across the border to instruct the children and their parents in preparation for Holy Baptism. 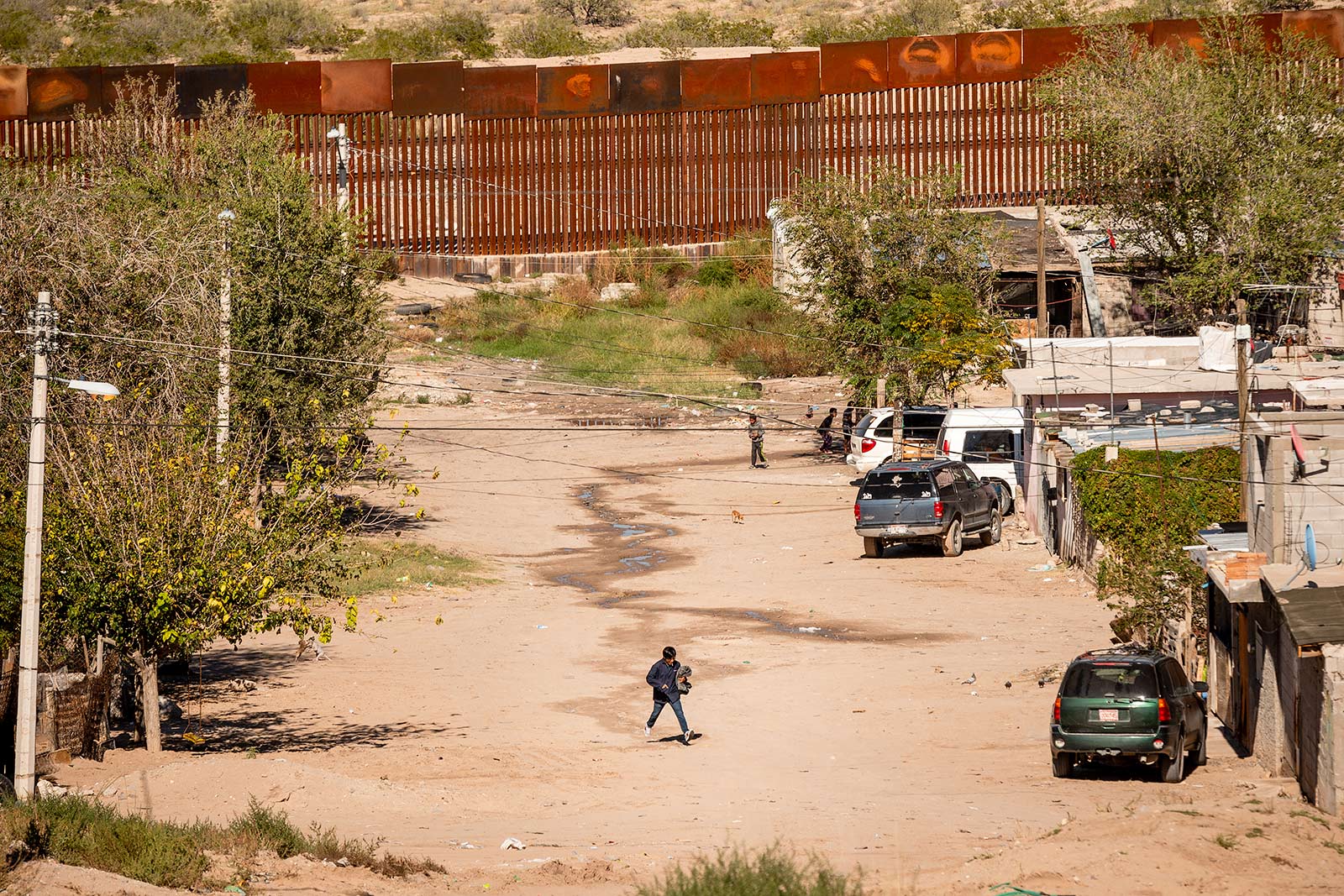 Down the road from the church with the U.S.-Mexico border wall in view.

Ten months later, two lines formed in front of the baptismal fonts with the crowd pressing close around. They were eager to witness the eternal miracles taking place through water and the Word in this spot near the U.S.-Mexico border wall, with patrol helicopters flying overhead.

Kimberly waited for her turn and climbed up the step-stool to reach the font. Heimer baptized her “en el nombre del Padre, del Hijo y del Espiritu Santo.” As Kimberly raised her dripping head, Heimer announced her birth into the family of God. The crowd cheered and praised God just as they did for each one baptized that day.

“The pastor did this to me,” said Kimberly, “he made the sign of the cross in my heart and on my forehead, and at my Baptism he told me that I was already with God.” 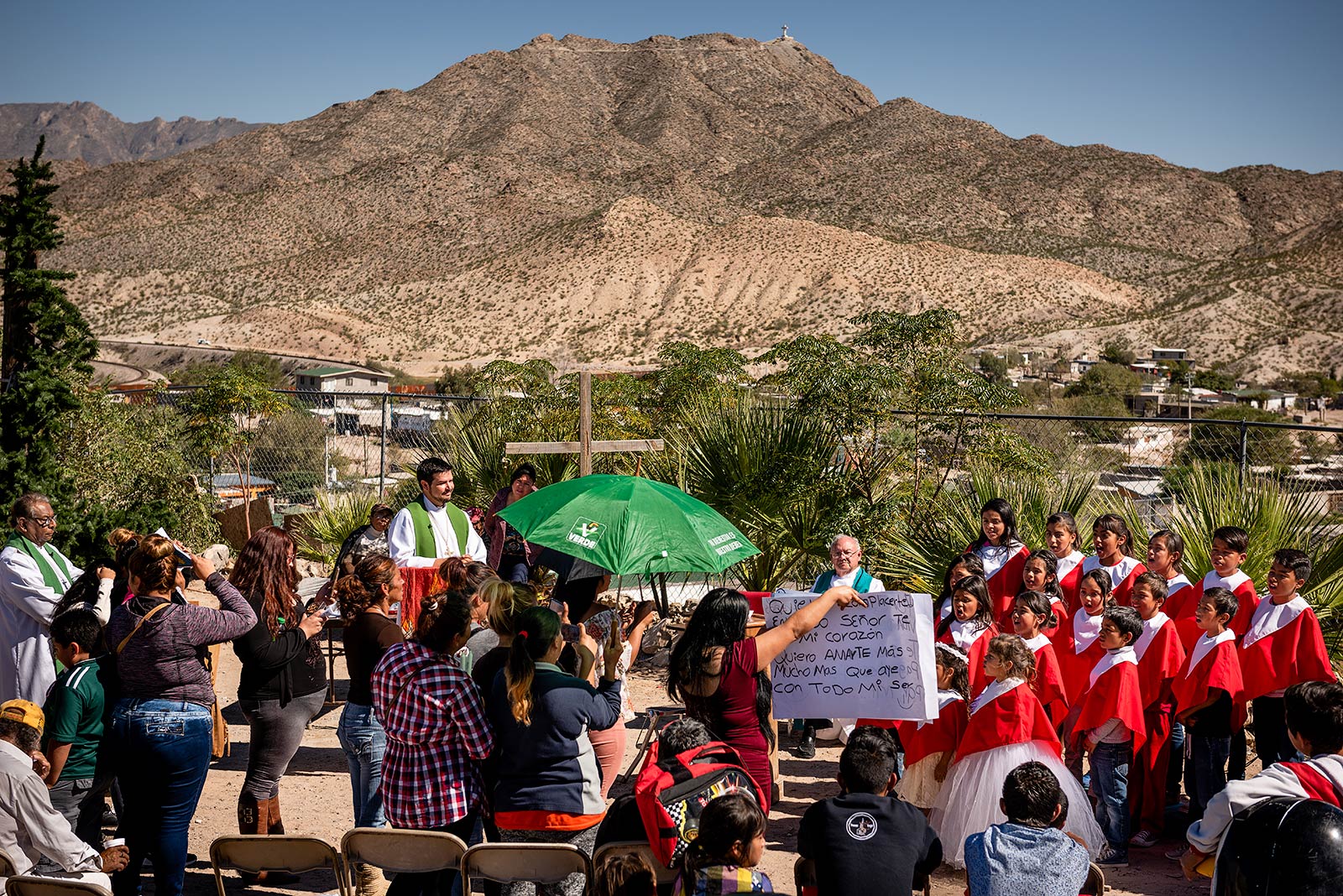 Newly baptized children sing during a Service of Baptism. In the background is the Sierra de Cristo Rey in Sunland Park, New Mexico.

“We don’t want to define them by their tragedy, especially Kimberly, because her dad and mom did come to faith before they were killed. I want her to know that she’ll see them in heaven, that she can live her life not defined by that tragedy but by what Jesus brings to her,” said Stephen Heimer. 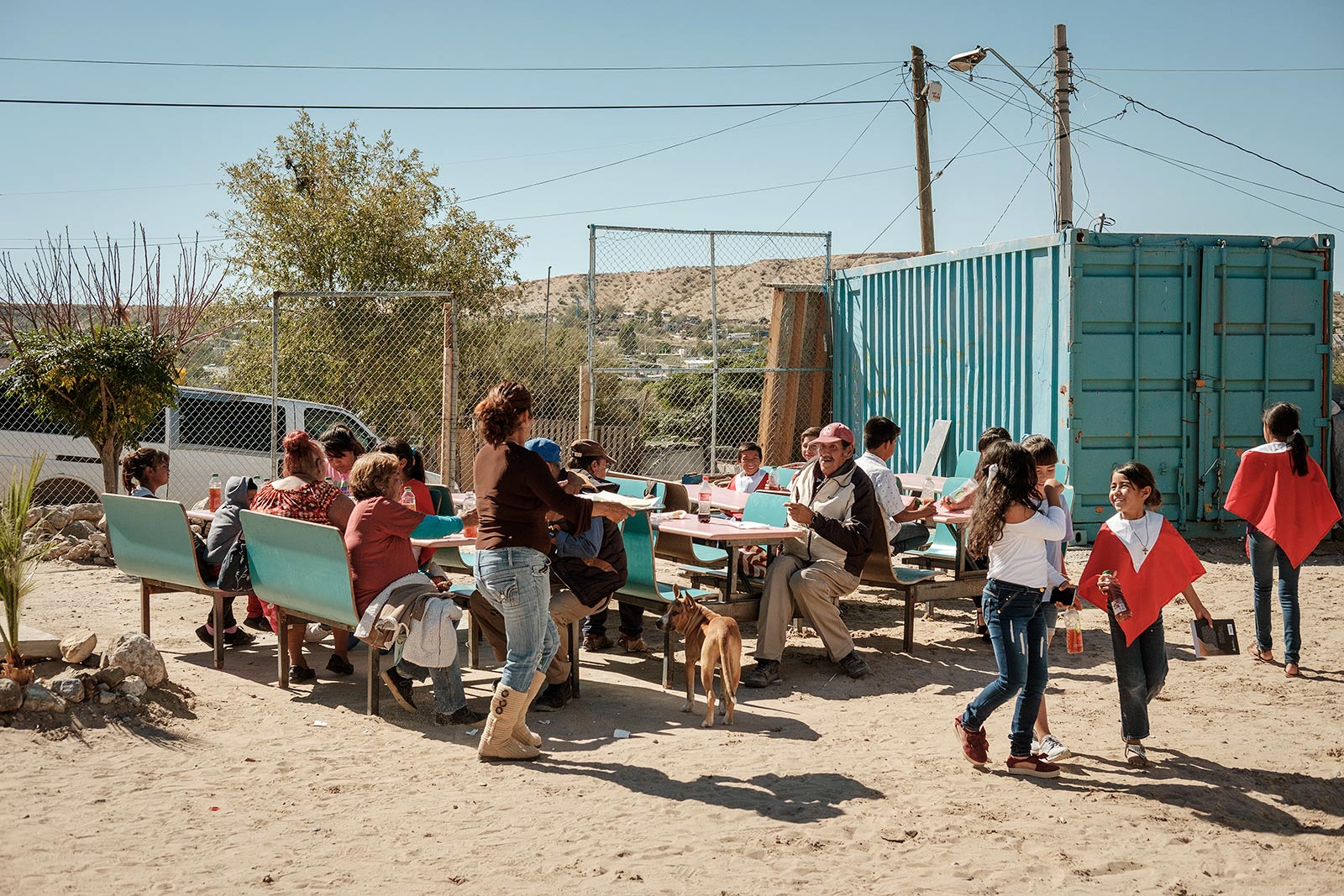 Church members and visitors gather for fellowship after the service.

Reflecting on the day’s events, he continued, “Most of these children and families have faced great hardship and tragedy all their lives. Jesus said, ‘Let the children come to me.’ Here they are! Now baptized! Today was pure joy.”

Lives changed, now and for eternity. Thanks be to God.

Almighty God, You delight when Your children call upon You as a loving Father. So keep all those who trust in You in Your tender mercy. Bless those who were recently baptized into Your Kingdom. Be with all those who bring Your Word into places of danger and fear. Protect them and provide ways that Your Word may be proclaimed. We especially pray for the work in Juárez, that all might hear the Word, receive the Sacraments and rejoice in Christ Jesus, in whose name we pray. Amen.

Bearing the Light of Christ in a Chaotic World

Loving Others, One Soul at a Time

Serving Soldiers Even During a Pandemic

A Mighty Fortress of Mercy