Many People, But One Church

A multicultural church is a blessing from God in Milwaukee. 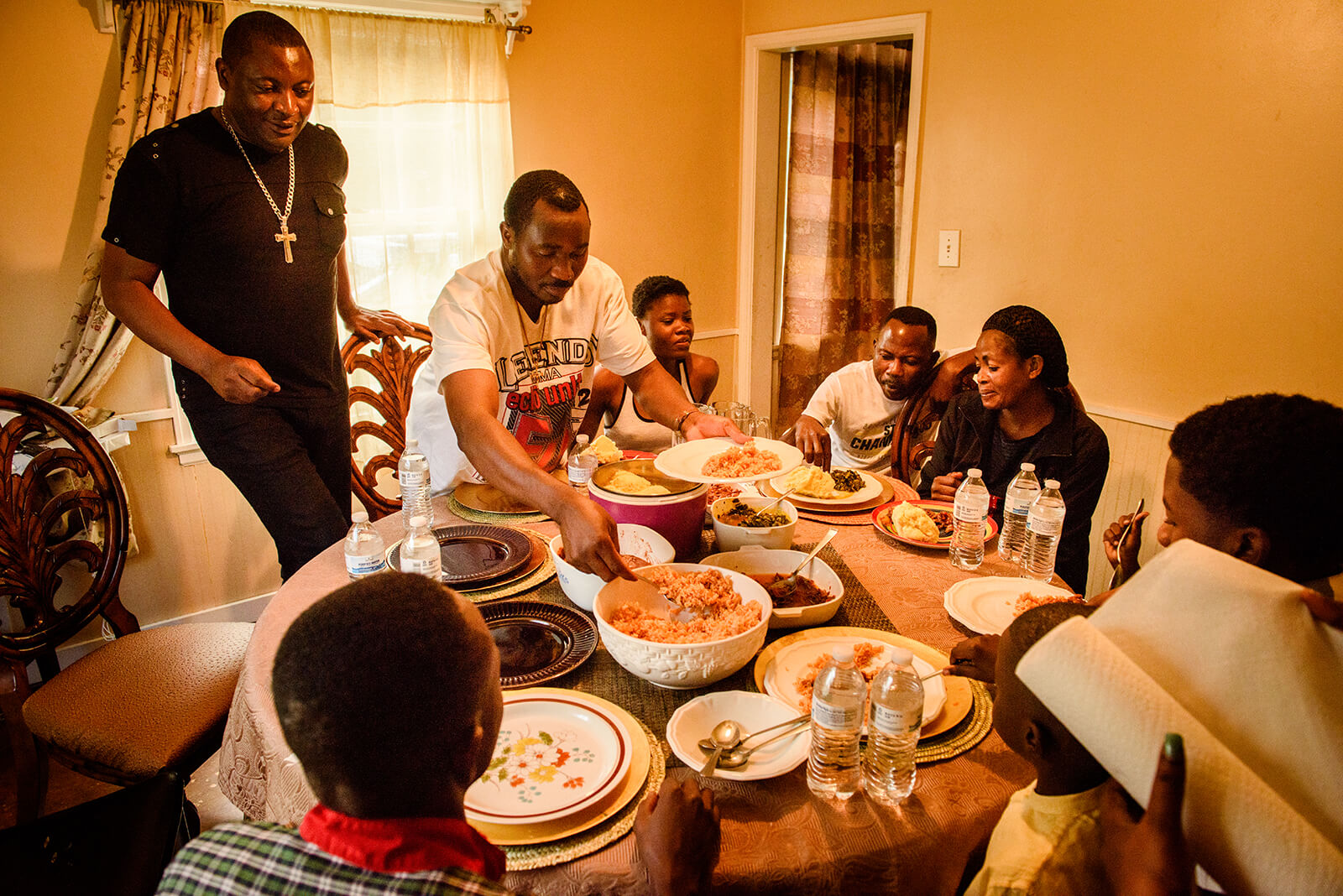 The Rev. Gui Kasongo Kabeo (standing at left), pastor at Eglise Lutherienne Internationale de Sion (International Lutheran Church of Zion) and Gospel Lutheran Church, both in Milwaukee, sits down to his dinner table. Kabeo houses refugees, some seen in this photograph, who do not have a place to go when they arrive in the United States.

“The world is full of opportunities for ministry,” says the Rev. Don Hougard. “The hard part is that most of the opportunities take us out of our comfort zone. God often leads us to places where we did not want to go and to people with whom we have very little in common.”

Hougard is the senior pastor of Benediction Lutheran Church in Milwaukee — a church ministering to Anglo-American, African-American, Hmong, German and French-speaking African people. The church has about 60 Hmong members and 150 members of a French-speaking African congregation. Each Sunday, the church conducts worship in English, Hmong and French. It also holds one service a month in German. 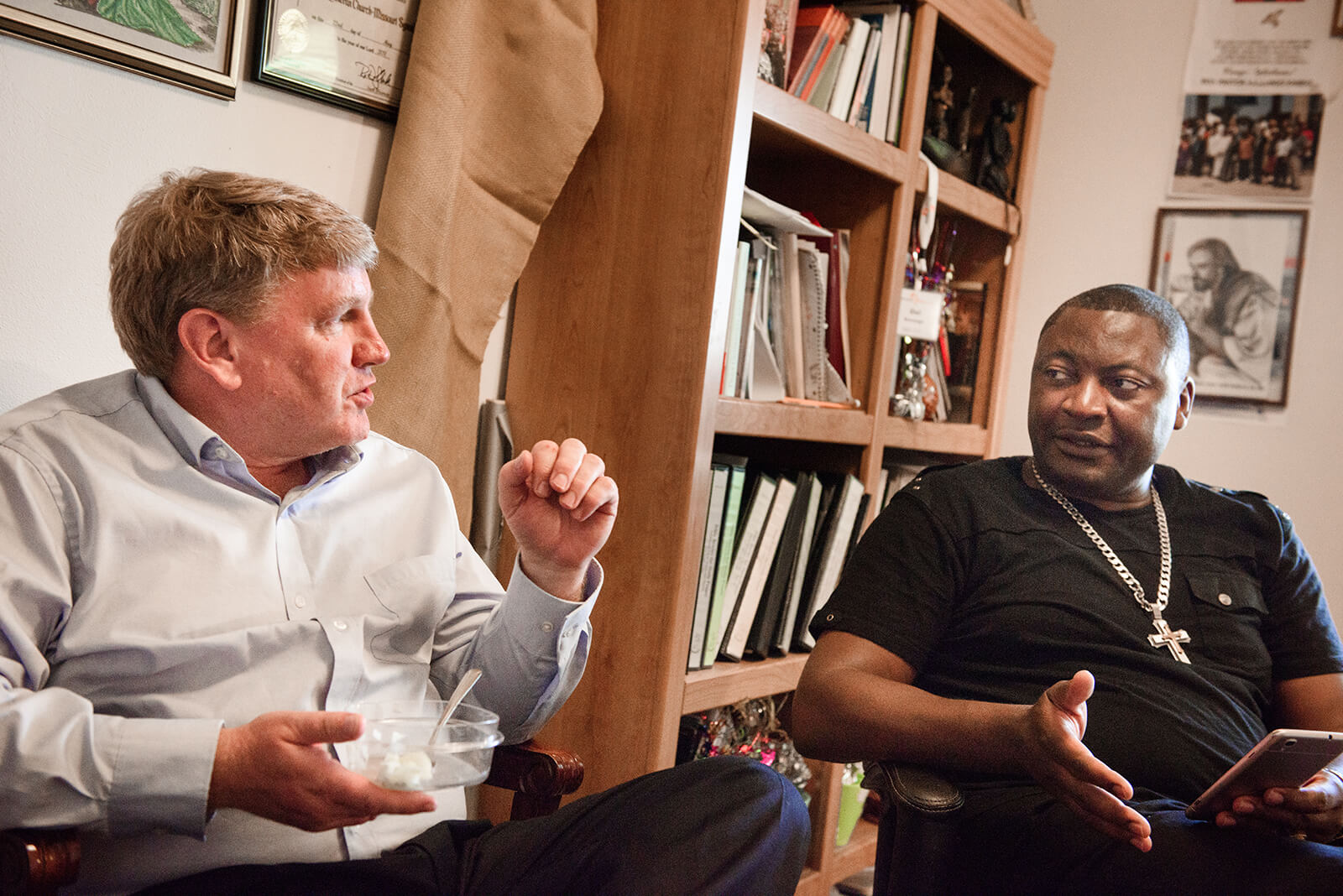 The Rev. Don Hougard (left), pastor of Benediction Lutheran Church, Milwaukee, talks with the Rev. Gui Kasongo Kabeo at his office in August.

“The various groups that we minister to at Benediction could not be more different,” Hougard says. “Missions is hard, messy and humbling [work], but the relationships that form in Christ with people who are very different from us are some of the greatest blessings in life.”

Hougard chronicled some of the church’s history in a presentation given for the Multiethnic Symposium at Concordia Seminary, St. Louis, last year.

“In 2003, we made a conscious decision to reach the growing Hmong population around our congregation,” writes Hougard. “Our first attempt, which was to send postcards to invite all of our Hmong neighbors to a potluck, was a dismal failure because the cards were lost in the mail and delivered the day after the event, but it was probably not a good plan anyway. Our South Wisconsin [District] mission executive, Rev. Bob Hoehner, pointed us in a new direction. The St. Louis seminary was beginning a new program called the Ethnic Immigrant Institute of Theology (EIIT). [Hoehner] had a candidate named Blong Vang for us, if we were interested. Blong enrolled, and we slowly began Hmong ministry with Bible classes … and other ministries, until we began a weekly Hmong service in 2006.” 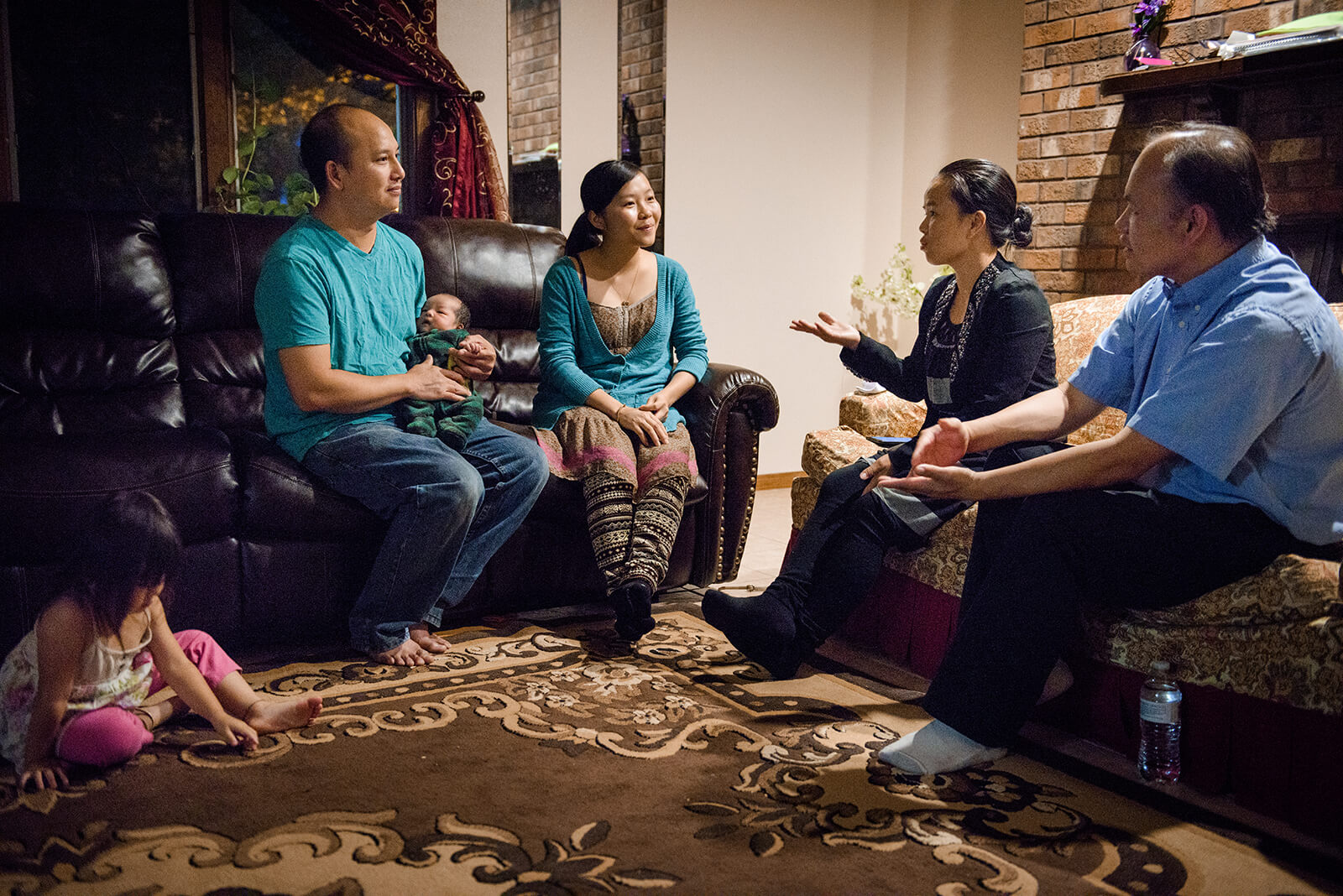 “The Rev. Blong Vang graduated from the EIIT program in 2007, but he was called to Oshkosh. We looked for a new leader from among our membership. Moua Vang entered the EIIT program and graduated in 2012 as our first called Hmong pastor,” writes Hougard.

“The challenge I see in our ministry is to bring people to Christ, not just non-Christians but Christians as well,” says the Rev. Moua Vang, who is now associate pastor at Benediction. “Christ is no longer the center in the life of many people. The greatest blessing is the joy when we find a lost one and bring that person to God.”

In 2006, Benediction once again had the chance to reach out to a new group — this time, to French-speaking African immigrants.

“Our district mission executive [Rev.] Dan McMiller [now the LCMS Office of International Mission’s associate executive director for Missionary Recruitment and Regional Operations] asked if we would consider hosting a French-African congregation,” Hougard says. “An agreement was put in place … [and] the children were eventually all baptized. In 2012, the congregation was formally received as a member of the LCMS, and Pastor Gui Kasongo Kabeo was ordained and installed as their pastor after completing the EIIT program.” 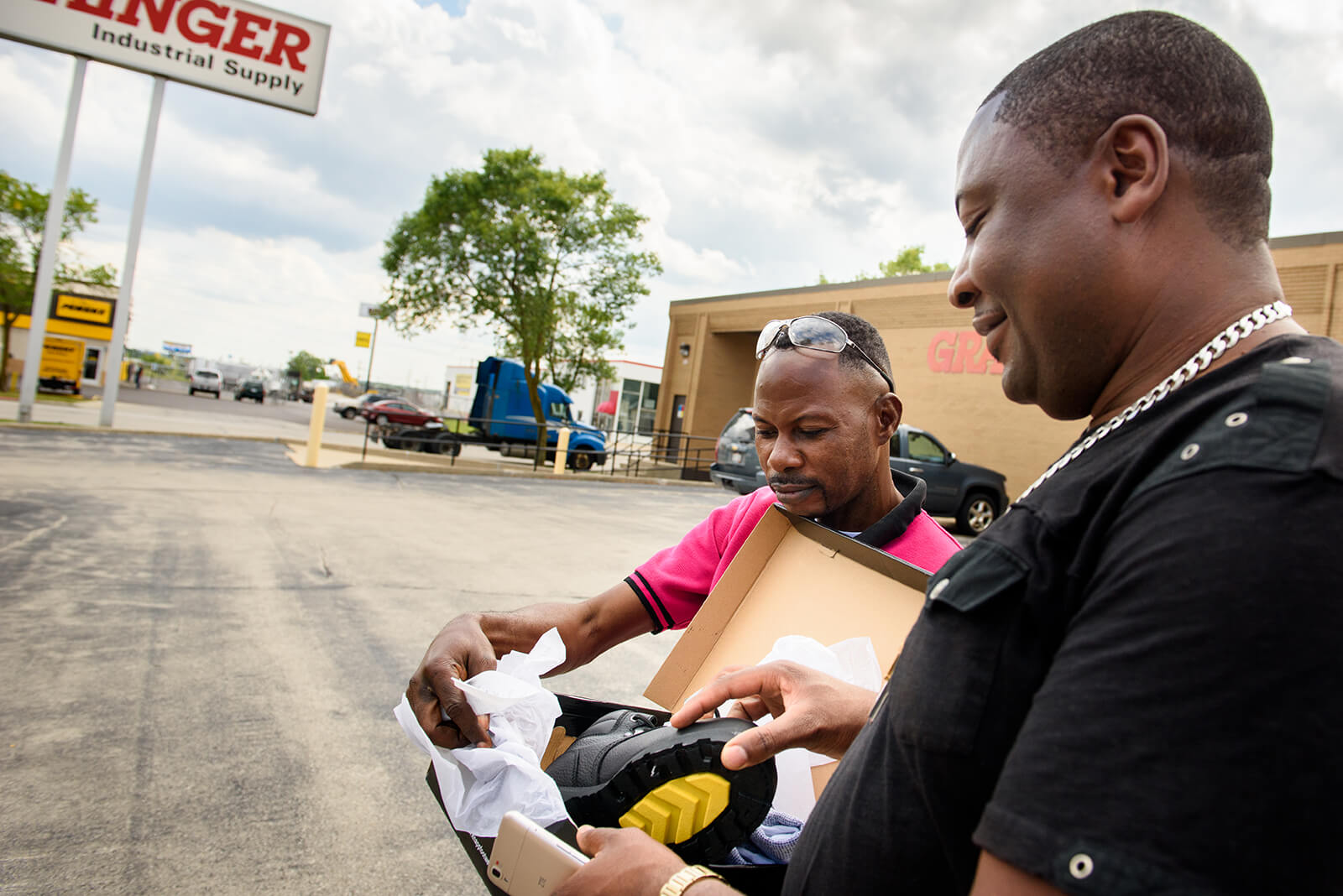 The Rev. Gui Kasongo Kabeo helps Pierre, a Congolese refugee, pick out shoes for his job at an industrial supply company in Milwaukee.

The Rev. Gui Kasongo Kabeo, who church members know as “Pastor Gui,” studied to become a Lutheran pastor at Concordia Seminary, St. Louis, and was ordained at Benediction in 2011. His congregation, Eglise Lutherienne Internationale de Sion — also known as Zion International — became a chartered congregation of the LCMS in 2011.

“We thank God for people who accept us with our differences,” he says.

Pastor Gui received a $24,000 “Stand With Your Community” (SWYC) grant last year to help new immigrants from Africa adjust to life in the United States.

As part of the Synod’s efforts leading up to the celebration of the 500th anniversary of the Lutheran Reformation, grants were awarded for Lutherans to engage in local witness and mercy outreach — a reflection of Martin Luther’s passion for all to know the true Gospel. Funding for the grants was provided through a partnership between the LCMS, Thrivent Financial and Lutheran Church Extension Fund.

In addition to providing basic necessities and transition assistance for newly arrived immigrants, the grant also has allowed for much-needed maintenance on the church van that is used to transport African immigrants to and from church as well as to and from work, until they earn enough money to buy their own transportation.

Hougard says he is impressed by the commitment these pastors exhibit for being Lutheran and sharing the true Gospel.

“All of our ethnic pastors are committed Lutherans,” he says. “This is important because all of our ethnic members are, to some extent, outcasts from their own culture, whether it be Shamanism for our Hmong members or Pentecostalism for our African immigrant and African-American members. There is a lot of pressure for them to return to their roots.

“The church is never static. It is never homogeneous. It is always changing,” Hougard continues. “At one point, we were the new ‘different’ people whom Christ called. Today He is calling people who are different from us. He is forming one church out of many kinds of people.

“Despite all that might divide us, we come to love each other as dear brothers and sisters in Christ,” he says.

Lord Jesus Christ, You reunite Your people into the one body of Your holy Church. Bless the work of Benediction Lutheran Church and other congregations as they reach out with the Gospel to all those in their community. We thank You for the EIIT program and those trained to proclaim the Gospel of Jesus Christ. May this good work bear fruits according to Your gracious will. Amen.

Such as I Have Give I Thee