God is at work in Puerto Rico following the hurricanes that devastated the island last fall.

“The hurricane changed the life of everyone here. They know they are vulnerable,” said William Torres, a lay evangelist for the Lutheran church in Mayaguez, Puerto Rico, who is helping to coordinate the disaster response. “Being a native Puerto Rican, I know the need of the city and of the country.”

Hurricanes Irma and Maria hit Puerto Rico in the fall of 2017, devastating the island and leaving its residents without power and in grave need of assistance.

“When the hurricane happened, a lot of water entered into the house through the windows, through the roof. The roof opened up in places. A lot of branches came down. A lot of garbage was carried along in the water along the streets, around the area here,” remembered Sylvia Gonzalez, speaking through an interpreter.

The Lutheran Church—Missouri Synod (LCMS) responded quickly through LCMS Disaster Response and the work of LCMS missionaries in the region. 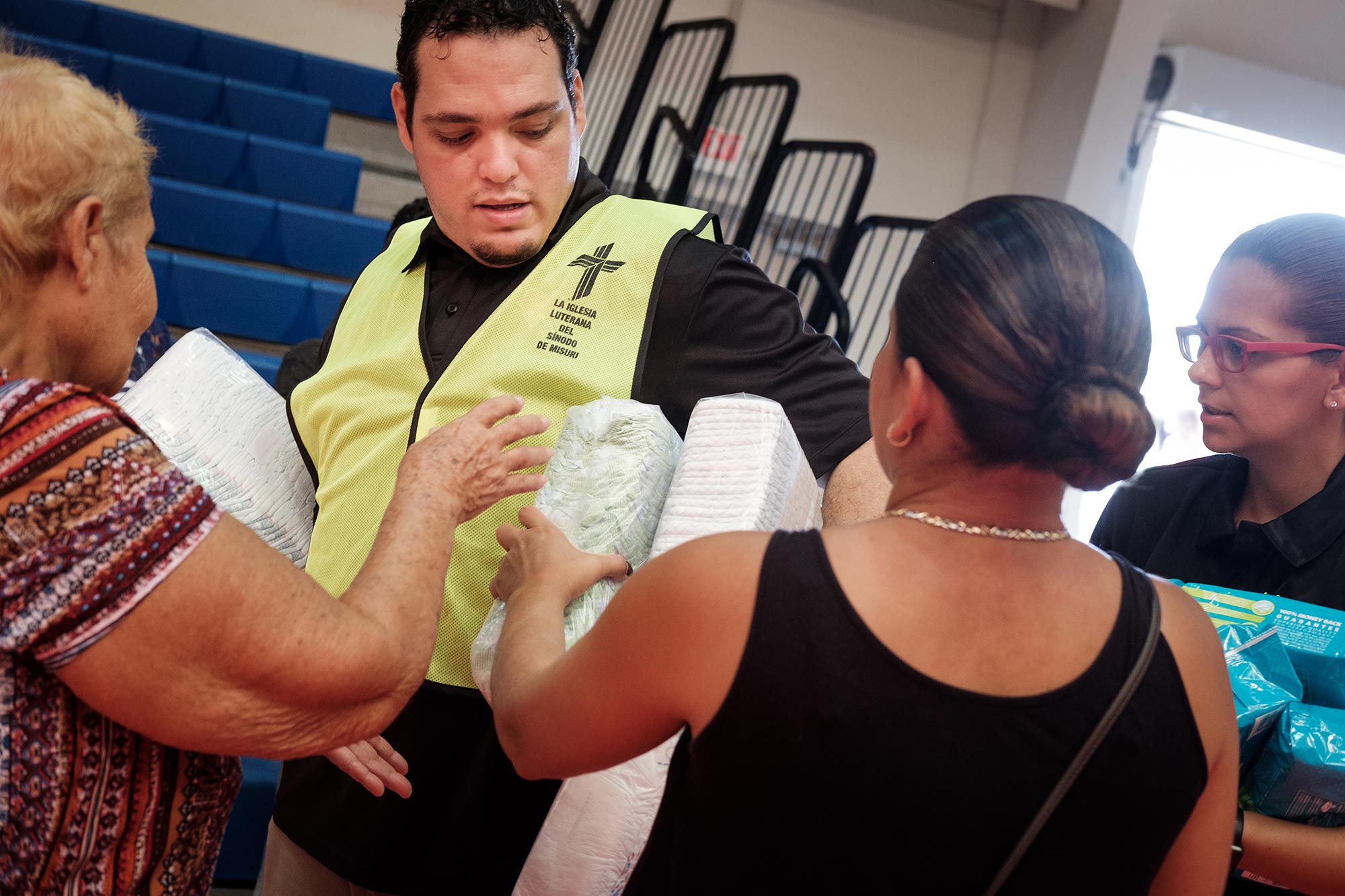 “The Lutheran church was the first organization that gave help in this community,” said Gonzalez, who lives on the western side of the island in Mayaguez, where Principe de Paz (Prince of Peace) Lutheran Church is located. “When I heard they were offering food, I went there and received the donation of food right away.”

“It was wonderful … the feeling of being back into the church.” Watch Sylvia Gonzalez talk about how she came to the Lutheran church.

The chaos created by the storms was met with mercy and compassion. As in most situations, the immediate needs of food, water and shelter were addressed. And with that work, God’s love was not just lived out, but proclaimed.

“When we talk with the people, we said it is not just food for the body, but it is just the Gospel, saying important things for this life and for eternal life,” said the Rev. Arturo Gustavo Maita, pastor of Principe de Paz. “So, it is important to see Christ — not just the food, but also the work of Christ.” 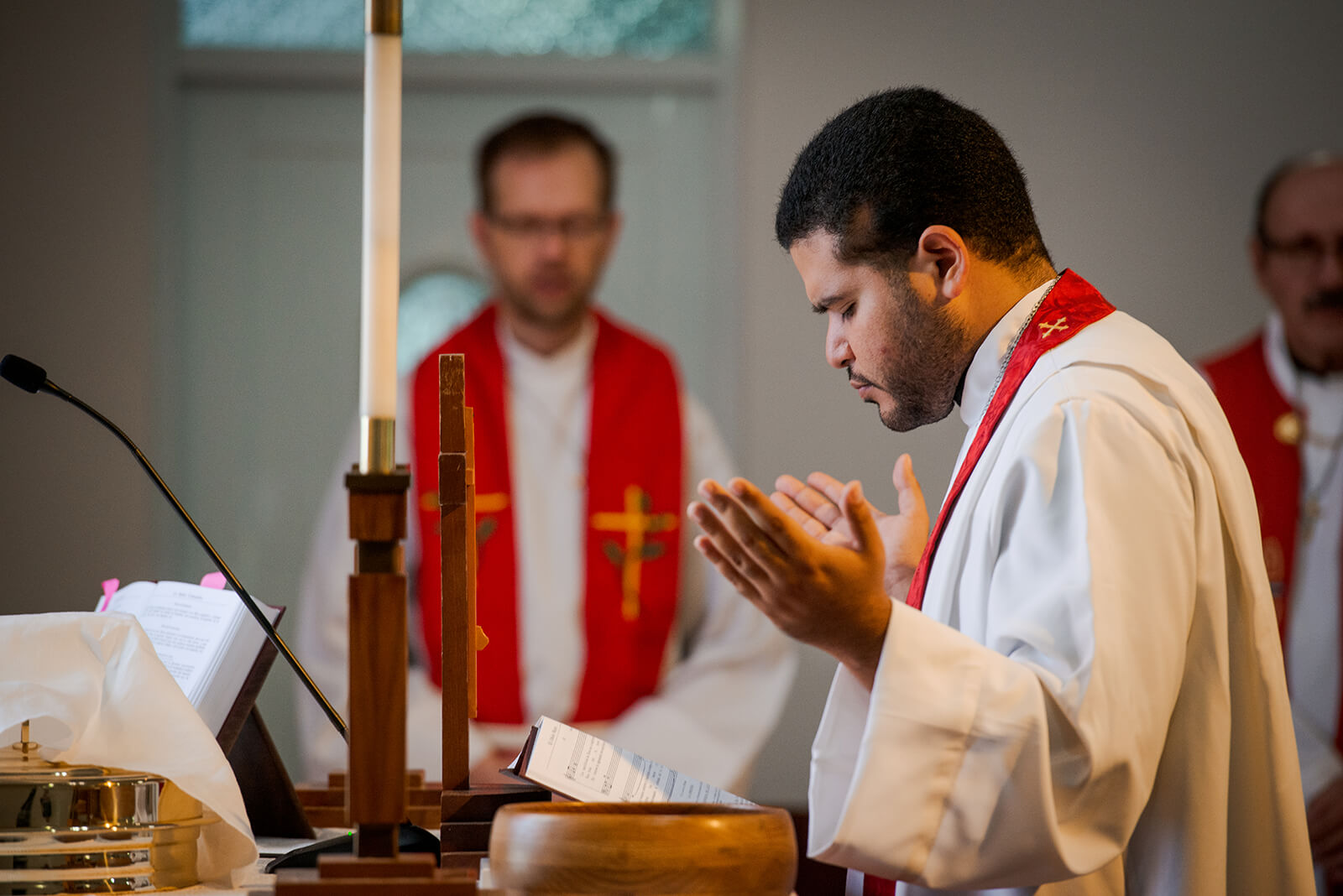 Maita, who is a native of Venezuela, recently arrived in Puerto Rico after completing his vicarage in the Dominican Republic. He was installed at Principe de Paz and is already hard at work bringing Christ’s mercy and the message of God’s love to the people of Mayaguez.

Eight months after the storms struck, Maita looks around and sees people struggling daily. “Everybody is suffering a lot. They need food. They need spiritual care. They need cash money,” he said.

He notes that it isn’t always easy to provide care for them due to governmental and other restrictions, but the effort is worth it. “Being a pastor is like being Jesus’ hands and Jesus’ feet, helping people and preaching the Gospel for eternal life. It is really good to say to the people, ‘Jesus loves you, and you can come to the church and celebrate the new life in Christ.’”

‘A Way to Present the Gospel’

The Rev. Charles St-Onge, area facilitator for LCMS mission work in the Caribbean, sees the present work bearing fruit, as well as the potential for ongoing outreach. “The Gospel is flourishing — mercy has provided a way to present the Gospel to people who otherwise would not have cared.”

In both Mayaguez and Ponce, where a new Lutheran congregation began in February 2018, mercy work has and continues to connect people to the church, where they hear God’s Word.

Even as bags of food and other staples continue to be distributed weekly in Mayaguez and Ponce, the team is organizing to repair damaged roofs and homes in both communities, all while proclaiming the Gospel.

In Ponce, Missionary Pastor Richard Schuller describes how he is working to bring Christ to people in a downtown storefront. “We’ve tried a lot of different things. First we started in a park in the gazebo, providing activities alongside teaching the Six Chief Parts [of Luther’s Small Catechism] and giving away Bibles,” he said. “We are reaching out where they are. We offer Bible studies in the mall, in a nursing home, wherever people are gathered, that is our goal.” 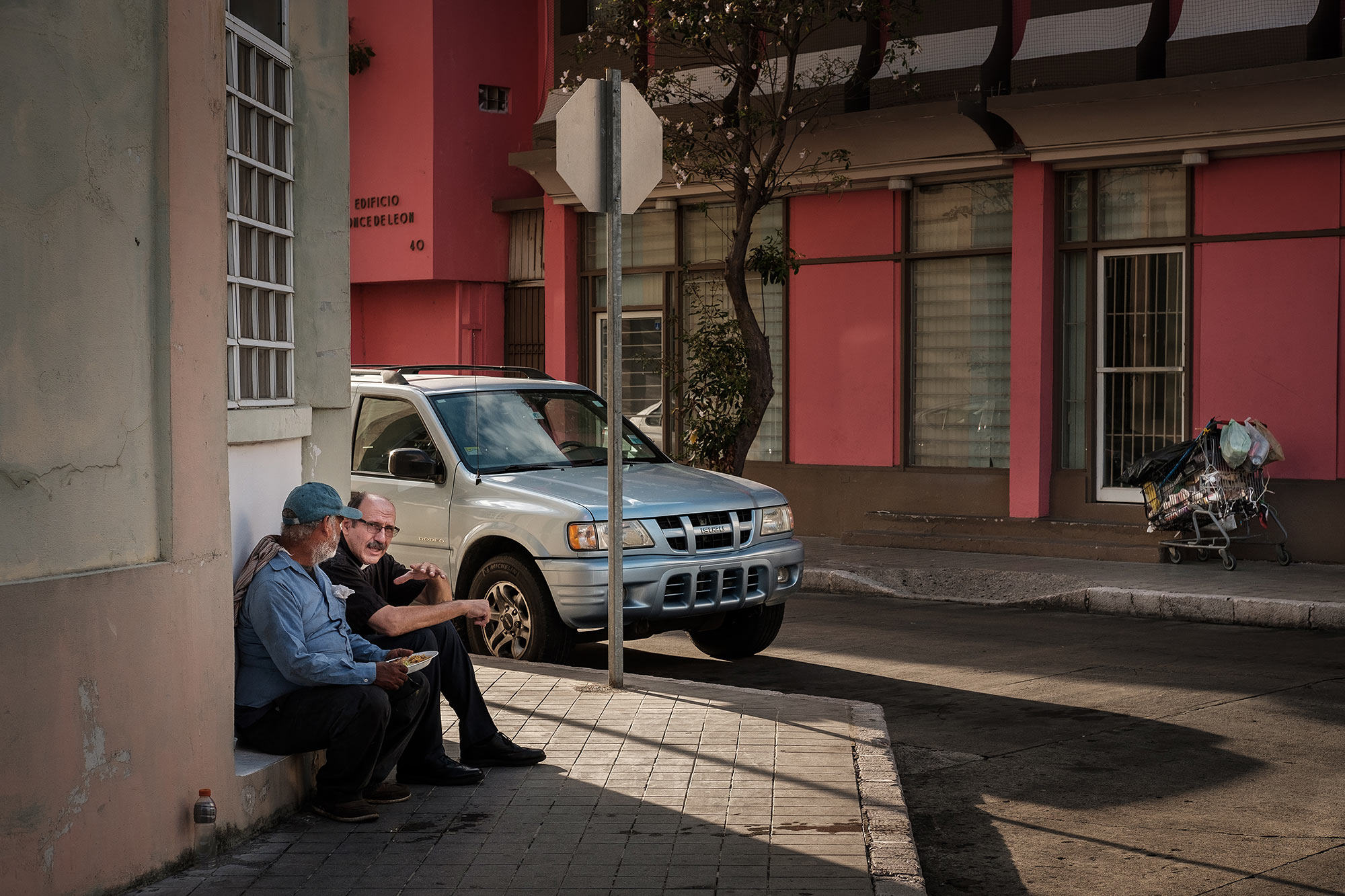 The Rev. Richard Schuller, LCMS missionary to Puerto Rico and pastor of Fuente de Vida (Fountain of Life) Lutheran Church in Ponce, sits with a homeless man on a street corner across from the church. Schuller brought the man a plate of food from the church’s fellowship meal.

As part of the ongoing work in Puerto Rico, the missionaries are working to open a third congregation. And now a mercy center, called the CARD — Casa de Amparo y Respuesta a Desastre — is open next to the church in Mayaguez. The building formerly belonged to the Amparo family, and it is still known as such in the community. This apt name (amparo means “protection” in Spanish) was retained in the name of the facility, since the goal is for this to be a place where the community comes to look for mercy and help, both physical and spiritual.

Drawn to the Church

It is easy to think about a disaster like this on a grand scale. The number of people affected is staggering. Yet the Word is proclaimed to individuals, and God works to bring each of His children into His Church.

Gonzalez is one such person. She was drawn to the Lutheran church through the love she witnessed there. “When I entered the church, I met people who offered so much help and love, which drew me in and I wanted to help as well,” said Gonzalez. “Everybody was in need during that time, and I saw that they gave the help without selection, without choosing who was most deserving … they gave to all.”

But there was more. “I was drawn by the doctrine of the Lutheran Church,” she said. “I took classes with [Pastor] Gustavo [Maita]. I also learned from the Small Catechism in classes at the church.”

Sometimes God allows us to see the fruits of our labor and the blessings of His Kingdom. In April, a group of congregation members, missionaries and other workers gathered to witness Gonzalez’s confirmation. God’s faithfulness and provision were manifest in His gracious gifts given again. 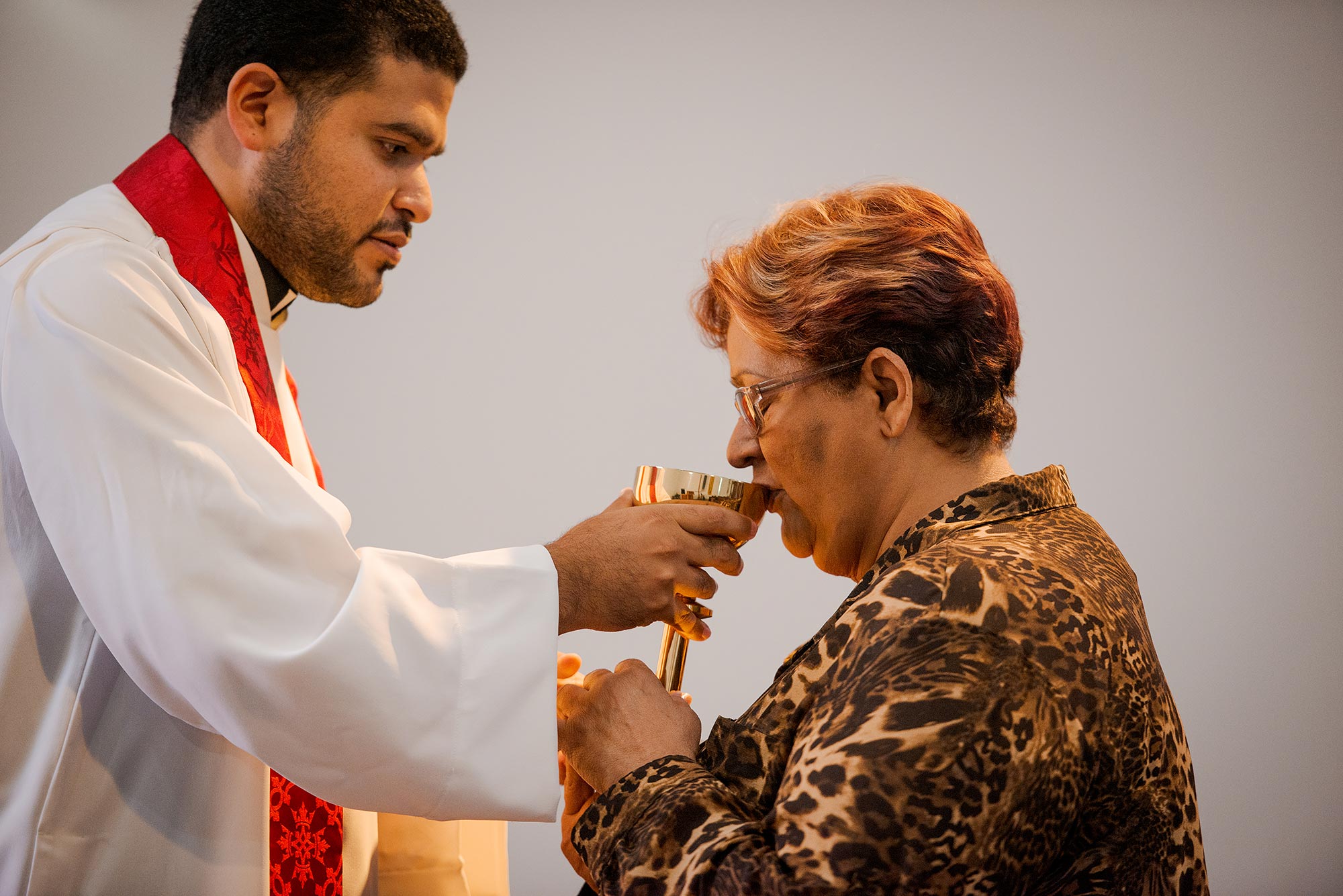 Sylvia Gonzalez receives the Lord’s Supper for the first time as a communicant member of Principe de Paz.

“When I received the Holy Supper for the first time as a communicant member, I was struck by the fact of the sacrifice that Jesus made on the cross for my sins,” Gonzalez said.

The storms created chaos and changed everything. And through that, God is working to create community around His Word and Sacraments through acts of mercy.

Gracious heavenly Father, we know not Your ways, for they are higher than ours. As storms continue to strike, we ask for Your mercy and grace for those who are affected. Bless the work of Your people who work in Puerto Rico to bring relief, but most importantly to bring the Gospel of Jesus Christ to those with whom they interact. Bless the work of LCMS missionaries and Disaster Response in Mayaguez and the surrounding area, that all might hear the Good News of Your love through Jesus Christ. Amen.

Our Faith-Borne Certainty of Hope

Alive Under the Lord’s Grace

On the Move Together