Confessing Christ in the Capital

Lutherans from around the country joined the March for Life in Washington, D.C., in January and learned about God’s gift of life at the LCMS Life Conference. 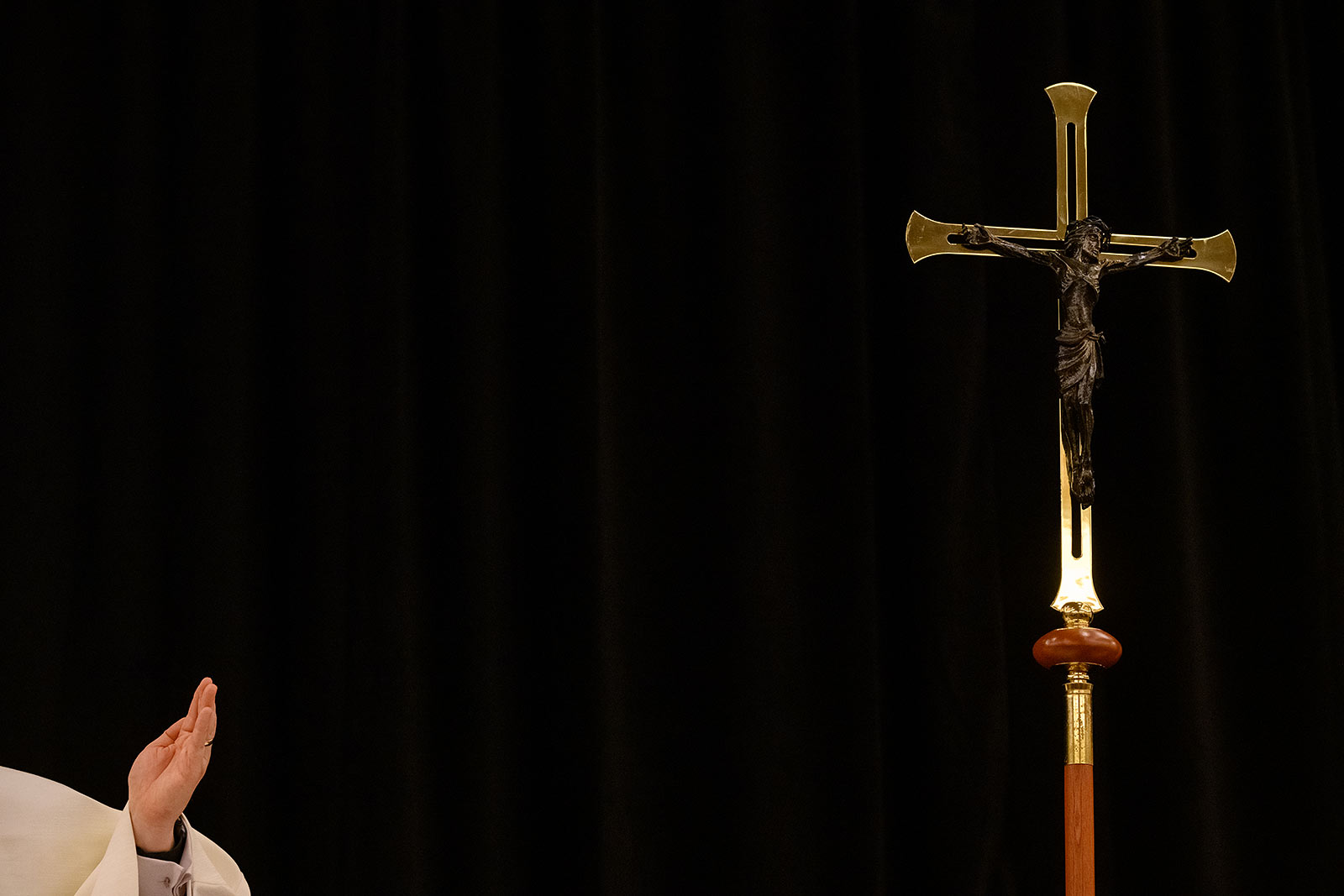 The Lord’s Prayer. The Creed. “A Mighty Fortress.” The Agnus Dei. The First Amendment. These were some of the things sung or recited by a group of Lutherans as they made their way down Constitution Avenue in Washington, D.C., at the March for Life on Jan. 18, 2019. In the midst of many different groups, people from congregations of The Lutheran Church—Missouri Synod (LCMS) proclaimed their faith in Christ and their role as citizens.

“We’re not here to protest. We are here to confess,” said the Rev. Christopher Esget, LCMS sixth vice-president and pastor of Immanuel Lutheran Church, Alexandria, Va., during his sermon at the Divine Service prior to the march.

“And we leave here ready to live in, with and under that confession.” Esget proclaimed that this is not just a dogmatic statement, but a living confession: “God is not merely alive; He is life. And that life is not static, but dynamic. He is living.” 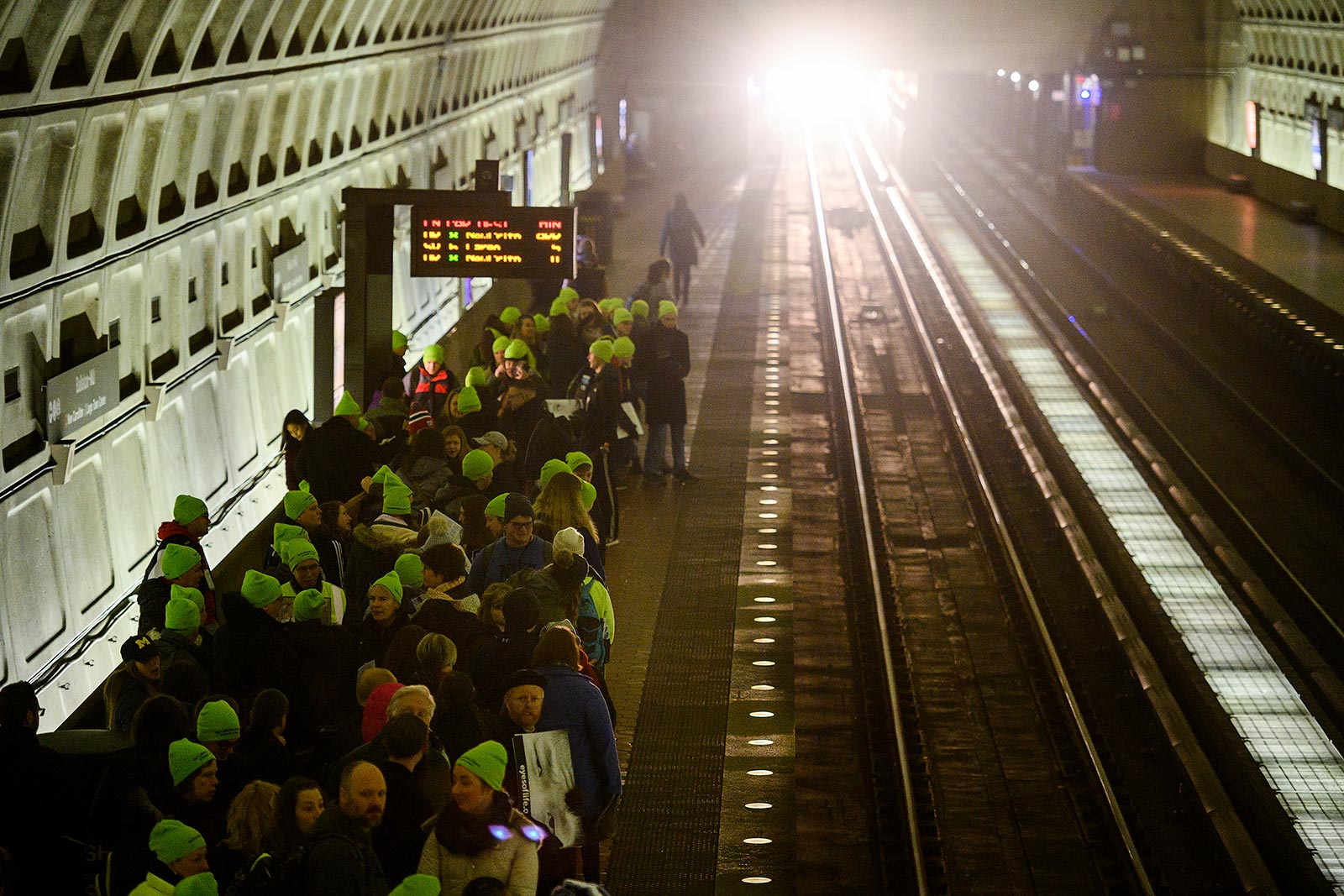 Following the Divine Service, the LCMS participants took the Metro downtown to participate in the march, alongside hundreds of thousands of others.

“Being pro-life is not in opposition to science. It’s quite the opposite in fact! Medical and technological advancements continue to reaffirm the science behind the pro-life cause — that life begins at fertilization, or Day 1, when egg meets sperm and a new, unique, human embryo is created,” according to the 2019 March for Life website. “Science is on the side of life.”

“The issue of life is at the intersection of faith, love and science,” noted the Rev. Robert Zagore, executive director of the LCMS Office of National Mission. “And in this matter, all three are on the side of life.”

As has become the custom, the marchers from the LCMS wore bright green hats and carried signs bearing the eyes of people at different stages of life. But at the march, the LCMS is becoming known for something other than signs, slogans and hats: The Lutherans sing.

“This is a fantastic chance to be joyful about an issue that is anything but joyful. We can be so different than the rest of the groups there in the way we sing and confess, even though we are there for the same purpose,” said Audrey Rich, a senior at Concordia University, Nebraska, Seward, Neb.

In between the singing, they prayed the Lord’s Prayer and confessed the Apostles’ Creed. Words and actions in concert proclaimed in the middle of the March for Life that true life is found in Christ alone.

When asked why she was there, Katlyn Selbe, a member of Risen Savior Lutheran Church, Basehor, Kan., answered: “To speak for the ones who can’t speak for themselves, and to walk with other Lutherans for babies.” As she marched with her 5-week-old son, Selbe said, “It’s such a blessing to hand down the Lutheran faith from generation to generation.” 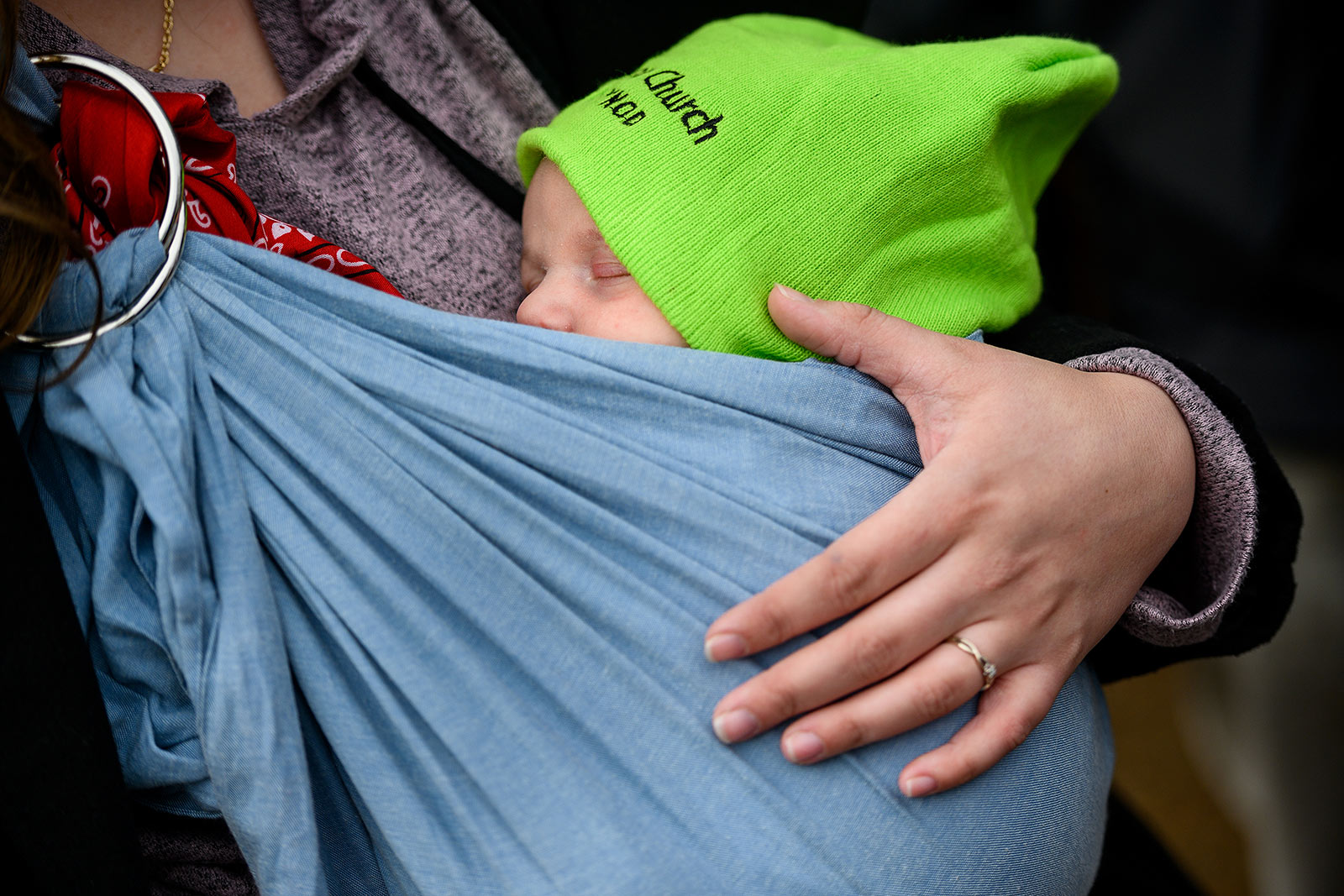 5-week-old Klein Selbe sleeps in his mother’s arms during the march.

As the march moved toward the Supreme Court, it passed by the Newseum, which has engraved on its edifice the words of the First Amendment to the U.S. Constitution. At the building, LCMS President Rev. Dr. Matthew C. Harrison, who was leading the LCMS marchers, stopped and led a recitation of those words: “Congress shall make no law respecting an establishment of religion, or prohibiting the free exercise thereof; or abridging the freedom of speech, or of the press; or the right of the people peaceably to assemble, and to petition the Government for a redress of grievances.”

This poignant moment evinced why Lutherans march for life. It is not to protest, but to lawfully assemble to confess God’s truth.

“Being Lutheran, having a biblical background for the meaning of your life,” said Katelyn Hamilton, a freshman at Concordia University Wisconsin, Mequon, Wis. (CUW), when asked why she marches. “We have more meaning behind our stance.”

Hamilton’s observation was illustrated when she and her friends from CUW encountered an atheist who told them that he hopes he won’t see them next year. When the girls asked why, he told them he hopes there won’t be a need. “I wondered what his reason was. What’s the point of protecting life if you don’t believe life comes from God?” wondered Kristin Rindt, a freshman at CUW. Glad that her new atheist acquaintance is “for life,” Rindt explained to him that she marched because of God’s love. “We believe Christ died for us. The Gospel gives us a reason to believe in life.” 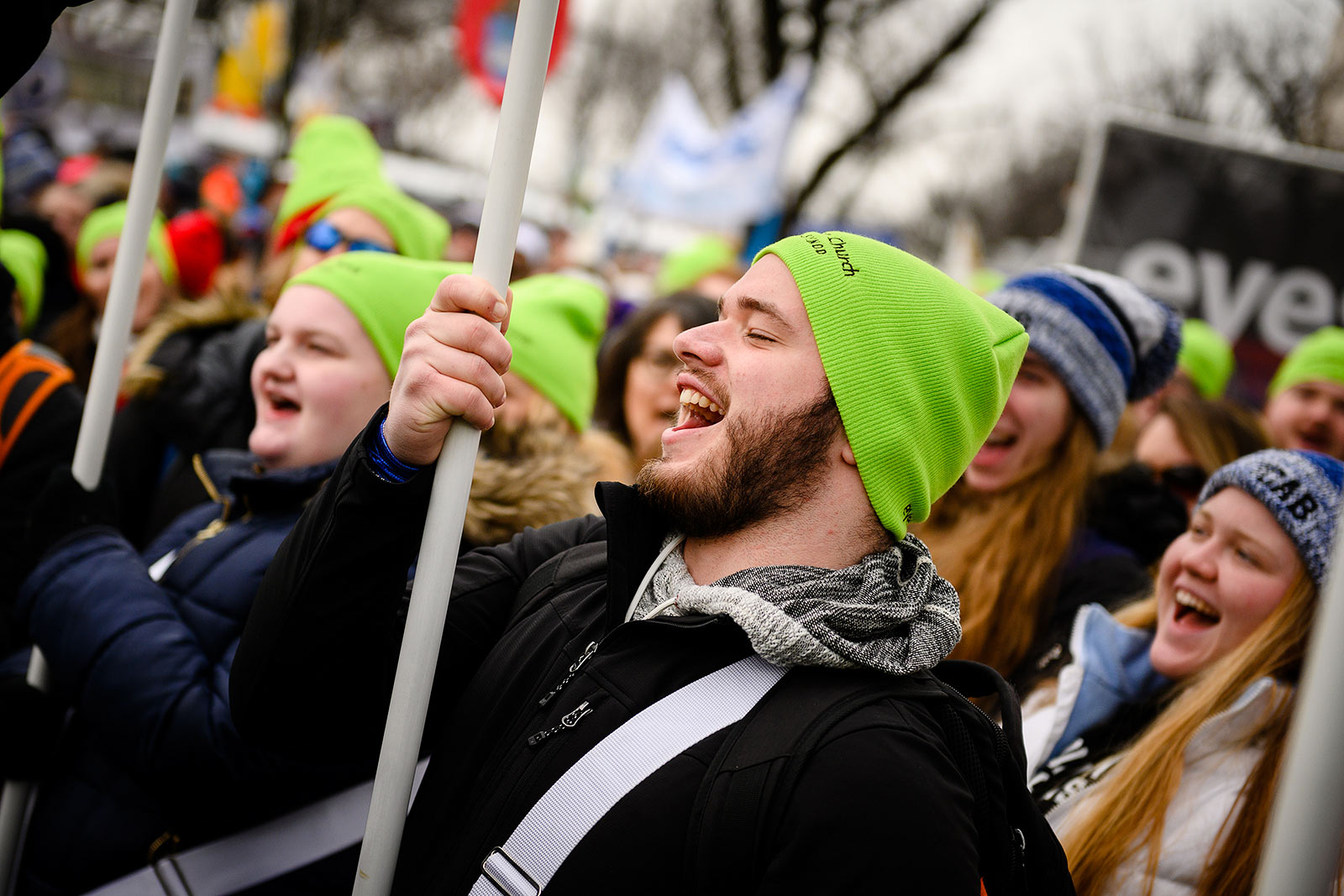 Marchers from the LCMS wore green hats and sang hymns along the route.

“You have to have an answer for the hope that you have. People here can help support that. There’s strength in numbers,” said Krista Wright, a member of Zion Lutheran Church, Newton, Kan. “Catholics kinda have a corner on this issue, but they shouldn’t. Lutherans are pro-life. The Christ Child came to earth as a baby, and we all have a part in that life.”

When the march ended in front of the Supreme Court, Harrison led a short devotion, encouraging all to pray, advocate and, above all, confess Christ. As the crowds dispersed, the Lutheran group headed back to the 2019 LCMS Life Conference, “Joy:fully Alive — Body & Soul.” 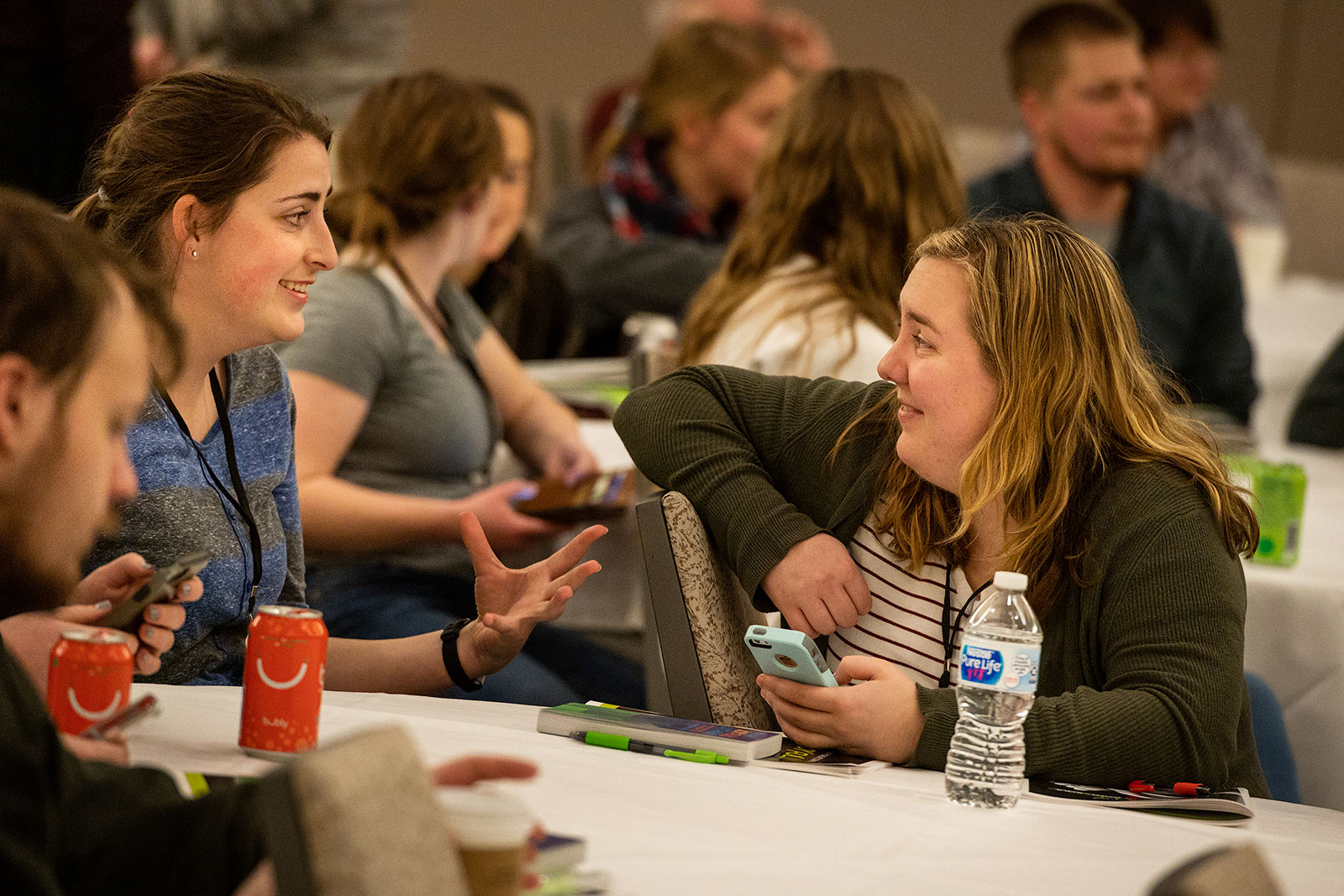 The conference provided an opportunity for fellowship, discussion, encouragement and learning.

With the mutual encouragement of the group and the wisdom of the presenters, those who came returned home to help their congregation celebrate life — all life, from conception to natural death.

Opportunities for worship and study of God’s Word continued to root the conference in the One who is life, even Jesus Christ, our Lord. Addressing the Life Conference on the opening evening, Harrison said that many people will ask us who we are at the march. Our response is simple: “We are the Lutherans. We confess Christ.”

Teaching Kids to Read Words and the Word

We Are All Shut-ins (for) Now